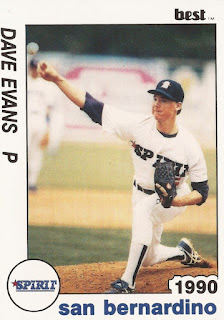 David Evans got carried off the field in the championship game of the 1989 National Junior College World Series, just not the way he had hoped, or should have been.

In a tournament where he picked up three wins for his San Jacinto North Gators, a line drive off his leg resulted in him getting carried off on a stretcher late in the game, The Houston Chronicle wrote. Still, though, his team won.

"This is what we worked for all season," Evans told The Chronicle later, telling the paper no matter how they got the win, he'd take it. "We've been playing hard and it finally came true. We made the dream come true."

While that dream came true, winning the junior college championship, another dream for Evans would never come true, making the majors. Evans signed as a pro that year, starting a pro career that spanned more than a decade, but Evans would never make the bigs.

Evans' pro career started that month, taken by the Mariners in the sixth round of the draft. Evans had been lined up to go to the University of Miami that fall. Evans, though, eventually chose to sign with Seattle.

After missing all of 1992 to injury, Evans returned for 1993, getting 13 starts between single-A Appleton and high-A Riverside. One more season in the Mariners organization and Evans moved to the Astros system, getting his first brief look at AAA Tucson in 1995.

His first full season at AAA came in 1996, going 6-12 at Tucson, splitting his time between starting and relieving.

Evans missed 1997, then split the 1998 season between the Pittsburgh and Baltimore seasons.  He then played three more seasons in affiliated ball, between the Orioles, Diamondbacks and Astros systems.

In 2001, playing for AAA New Orleans in the Astros system, Evans started one game as a result of another player getting called up to Houston, a call Evans never got. Evans played one more season in Mexico, ending his career.

Evans has since gone on to a career as a coach and instructor for the Houston Heat, an amateur baseball organization in Texas.