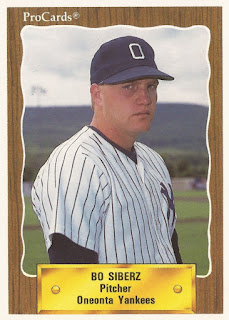 Bo Siberz changed his approach in mid-1991 and it resulted in a calmer approach to the game, according to The Greensboro News & Record.

It was calmer, especially compared to the locker room he damaged earlier that year out of frustration over a poor outing, The News & Record wrote.

"I used to want to tear things up and go crazy," Siberz told The News & Record. "Now I've kinda got it controlled where I keep it inside and slowly release it. I feel like that helps me now because I don't let it just stay inside me. I get it out and I look at each day as a brand new day. It really helps and it has shown in my performance."

It didn't end up helping enough. Siberz finished out that season for Greensboro, his second as a pro, with a 4.60 overall ERA. He didn't return for a third season.

Siberz' career began in 1990, taken by the Yankees in the 14th round of the draft out of Texas A&M University.

Siberz made his way to Texas A&M after starting at Dowling Catholic High School in Des Moines, Iowa. He is a member of the school's athletic hall of fame.

Siberz started with the Yankees at short-season Oneonta. The reliever got into 35 games there, saving 16 of them. He had a 3.32 ERA.

He moved to Greensboro for 1991, saving another 16 games. He had one good outing that April, coming on in the 10th inning of a game with the bases loaded and two outs. He got the strikeout to keep the game tied, The News & Record wrote.

"I just trying to keep the ball down a little bit better," Siberz told The News & Record. "I guess when you do that you achieve a little bit of success."