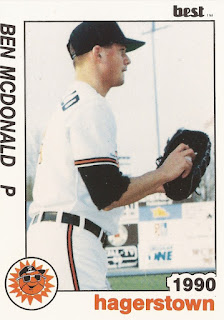 Going into the 1989 draft, Ben McDonald was going to be the top pick and everyone knew it. All he had to do was live up to those high expectations.

That, McDonald recalled to The New York Times 20 years later, was a lot of pressure to put on a young kid fresh out of college.

"You start to believe things," McDonald told The Times on the occasion of another surefire No. 1's selection, Stephen Strasburg. "I remember when Frank Robinson, my manager, told me, 'I think you're gonna win 20 games.' I’m like, 'I don't even know how to pitch yet.' I remember walking out of the office thinking, holy cow, that's a lot of pressure. I worry for Strasburg in that regard."

While Strasburg still has time to show why he was taken top overall, McDonald never quite lived up to those early expectations. McDonald's career lasted a respectable nine seasons, but it was shortened by injury.

Those high expectations for McDonald started at LSU. In 1989 at the school, McDonald went 14-3, with 194 strikeouts, The Associated Press wrote. He also won two games in the 1988 Olympics.

He also had much success, after giving up a game-winning grand slam in an elimination game of the 1987 College World Series, Sports Illustrated wrote in May 1989. It was a game that, despite his success, stuck with McDonald, the magazine wrote.

"Whenever I get to feeling a little bigheaded or think I'm on top of the world, it brings me back down to earth," McDonald told SI. "I just remember where I came from and what I've been through and what it took me to get where I am now."

Where McDonald soon was was the majors. It took him some time to sign, even threatening to jump to a proposed league that never took the field, but he debuted with Baltimore that Sept. 6. He'd gotten just two starts in the minors, at class-A Frederick.

In six outings, all in relief, McDonald went 7.1 innings, giving up seven earned runs. His season the next year started off with some injuries and he started at AAA Rochester.

Called up in July, McDonald got his first major league start July 21. He also showed the brilliance that was expected, throwing a complete-game shutout.

"It's great to see him finish like that," Orioles manager Frank Robinson told The Los Angeles Times afterward. "He went right after the hitters."

In 1994, he started the season 6-0, with an ERA of 2.33. Talk was, McDonald was finally meeting some of those expectations, The Sun wrote.

"Pitching coaches and other pitchers talked to me a lot, but for me there is no substitute for experience," McDonald told The Sun. "It never really sunk in until I got out on the mound and did it myself, experienced some failure, had some success."

McDonald went 12-10 for the Brewers that year. But, by July 1997, McDonald was done. Looking at a torn rotator cuff, McDonald never pitched in the majors again.

Back in 2009, as interest in his own selection top overall peaked as Strasburg's selection neared, USA Today caught up with McDonald at his Louisiana home. McDonald told the paper he always kept his career in perspective.

"Don't feel sorry for me," McDonald told USA Today. "There were other things I wanted to accomplish but didn't. But I still got to play in the big leagues. I still made a good living. I could have been hurt and out of the game my first year."