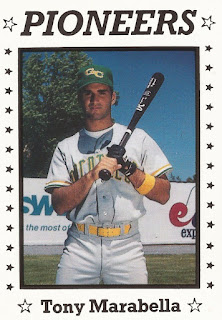 Tony Marabella had options coming out of high school. For the native of Montreal, though, the options were really just one option: Signing with the Montreal Expos, he told The Sumter Item in 1991.

"I considered the money and the offers from the other organizations," Marabella told The Item, "but signing with Montreal just seemed like the natural thing to do."

He signed with his hometown team, but, in a career that spanned eight pro seasons - and one appearance on the TV show "Unsolved Mysteries" after a health scare - Marabella never played for his hometown team in Montreal. He also never made the majors.

Marabella turned pro in 1989, signing with the Expos as an undrafted free agent, at the age of 16. He signed at that young age, having completed his high school education, according to The Item.

With the Expos, Marabella played his first season in the rookie Gulf Coast League. That August, he hit a walk-off, extra-inning home run. He moved to rookie Gate City for 1990, then single-A Sumter for 1991.

At Sumter, Marabella got into 107 games, but he hit just .239. Then a back problem forced him into surgery. That back problem required an experimental procedure to dissolve a disc impacting a nerve. He ended up being out the entire year.

He came back for 1993, playing 69 games between short-season Jamestown and single-A Burlington. Marabella then continued with the Expos system through 1995, making AA Harrisburg for 30 games in 1995.

It was during that span, apparently in 1994 with Burlington, that Marabella suffered the health scare that got him onto a 1996 episode of Unsolved Mysteries.

Marabella suffered a headache and collapsed during batting practice. He awoke saying he had amnesia. He returned to the field three months later and his hitting improved.

"I would run hard, play--dive everywhere," Marabella told the show, according to an Ark.com transcript. "Just play like a little kid. When the game was over, I'd go home and wouldn't even think about it. Because for me, it was fun. And that's how my game got better."

Marabella then moved to independent ball, playing two seasons for Madison of the Northern League, finishing out his career.