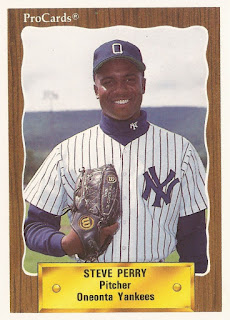 One of those players, Kerwin Moore, went on to a career that saw time in the majors. The other six went on to pro careers that fell short.

King High's Stevie Perry's career was one of those six players who fell short. He went on to a pro career that saw time in three seasons, but he never made single-A.

Perry's career began in 1988, taken by the Yankees in the 19th round of the draft out of King High. Perry has also been credited as Steve Perry.

He started with the Yankees in the rookie Gulf Coast League. The left-hander got into two games there his first year. In three innings, he gave up two earned runs. He also struck out five.