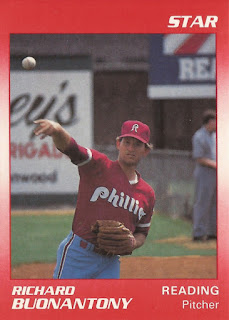 Rich Buonantony's father pledged to retire if his son ever made the majors, according to The New York Times in 1983.

That's because Buonantony's father worked in a Las Vegas sports book and the gambling connection to a major leaguer would be awkward, to say the least.

"To me, that's absolutely incredible because it is his livelihood, he's been doing it so long and it's a part of his life,'' Buonantony said of his father, according to The Times. "Imagine, if I'd ever get to the big leagues, he couldn't even ask me how I feel because of his position, he'd be finding out some information he wasn't supposed to know and some information I wasn't supposed to tell him."

Whenever Buonantony's father retired isn't clear. What is clear is that the end of the father's career didn't come with his son making the majors. Buonantony played as a pro for a dozen seasons, but he never made the bigs.

Buonantony's pro career began in 1980, taken by the Cubs in the 14th round of the draft out of Western High School in Las Vegas.

For 1984, Buonantony was included in a trade to the Brewers for Steve Lake. He played that season between single-A and AA again, he then moved to the Cardinals system for the next four seasons.