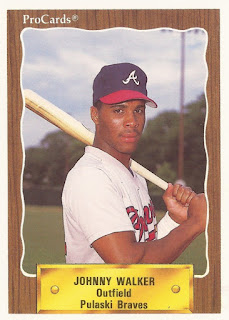 Johnny Walker returned to the University of Texas in September 1990 to play football, after spending a summer with the Braves at rookie Pulaski.

He looked forward the next year to possibly playing pro football, too, according to The Pittsburgh Post-Gazette. It was something his wide receivers coach at Texas believed was possible.

"He's played baseball every year and it's never been a problem with football," his coach Clarence James told The Post-Gazette. "I think he'll get a chance to play both (professionally)."

Walker's baseball career began that June in 1990, taken by the Braves in the fourth round of the draft out of Texas.

At Texas, Walker played well enough on the baseball field to get noticed by the Braves. On the football field, Walker won all-conference honors as a wide receiver in 1989 and when he returned in 1990.

With the Braves in 1990, Walker played at rookie Pulaski. He got into 39 games and hit .212. He then returned to Texas and had his second all-conference year. He's still 10th place all-time at the school for career receptions.

He resumed his baseball career with the Braves for 1991, playing at rookie Idaho Falls. He hit a June 10th-inning grand slam for the club in a win. He hit .315, but he only got into 18 games. He also didn't return for a third season.

That same summer Walker got drafted in his other sport, football. He was taken by the Green Bay Packers in the 8th round, but he didn't get into a game.

Two years later, Walker got his second chance at football, in the Canadian Football League. He had hoped to play for his hometown San Antonio Texans, according to The Associated Press. That team never got off the ground, but Walker still found a home, with the Toronto Argonauts.