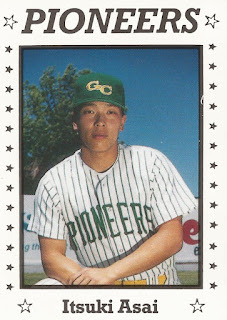 Down 2-0 in the eighth in this September 2004 contest, the Hiroshima Carp sent Itsuki Asai up to pinch hit.

With one on base, Asai came through. He knocked an RBI double, then came around on a single to score the tying run, according to Japan Baseball Daily.

Asai came through in a spot where he had come through so many times in the past, as a pinch hitter.

In a career that spanned 13 Nippon Professional Baseball seasons, Asai came through as a pinch hitter 154 times. It was enough to earn him second place all-time in NPB at the time of his 2006 retirement.

In all, Asai amassed 523 total hits in Japan, with a .285 average, playing his entire career with Hiroshima.

Asai's career began in 1989, taken by Hiroshima in the sixth round of the draft, out of high school in his native Japan. The Japanese form of Asai's name is 浅井樹.

With the Carp, Asai soon found himself sent to the minor leagues in the United States, with rookie Gate City. At Gate City, Asai got into 58 games, hitting .253, with two home runs.

Back in Japan, Asai played with the second team, until making his debut in 1993. He got into just two games. He then returned to the first time in 1995, and became a regular.

Asai hit at least two of those home runs as "sayonara" shots, a grand slam in May and another home run in a September game. In August, he went on a tear, hitting home runs on three-consecutive nights, according to The Japan Times.

Asai continued playing into 2006. When his career was over, Asai had played in a total of 1070 NPB games for Hiroshima, hitting 52 home runs and finishing with a .285 average.

Asai has since continued in the game, serving as a coach for the Carp in the years since.