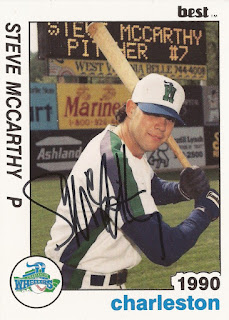 Steve McCarthy thought the end of his career would have been more traumatic. But by the end, he recalled, he was more frustrated than anything.

He was frustrated with the organization. But he was also frustrated elsewhere.

"I was frustrated with myself," McCarthy recalled to The Greatest 21 Days, "because at the end of the day it all comes down to you."

The realization, he said, was that he wasn't good enough.

He played in five professional seasons. He made AA. But he wasn't good enough to make it higher.

"I think there's some guys who basically say 'I was good enough, but things didn't work out for me,'" McCarthy said. "So the best way for me to deal with it was to say 'I wasn't good enough.'

McCarthy has since gone on to a successful post-playing career. He now runs a small computer hardware consulting business. He took time out of his family's vacation on Cape Cod recently to speak with The Greatest 21 Days about his time in baseball and since.
The end, McCarthy recalled, seemed to begin out of spring training 1991. That was the spring where he got an inning with the major league club, setting down the side in order. It was out of that spring that he was assigned for the first time to AA Chattanooga.

He'd been a closer the previous season at single-A Charleston. He'd even been a starter to begin his career. At Chattanooga, he quickly got the impression that he'd be used as a specialist. That ended up how he was used.

He seemed to be there for a week before he got into a game. When he did get into games, it seemed as though he'd be in for a single lefty late in a game.

"That whole specialist thing, it just didn't sit well with me," McCarthy said. "Then I wasn't pitching well because I wasn't playing a lot."

About six weeks or two months of that and McCarthy was sent down to single-A Cedar Rapids. It was a place he'd been for much of the previous two seasons. It wasn't where McCarthy wanted to be.

"I was not in a good place mentally," McCarthy said.

What he did get to do at Cedar Rapids was watch teammate Trevor Hoffman pitch. Hoffman had just switched from being an infielder and would go on to a Hall of Fame-caliber career.

"He was on this ridiculous vertical trajectory so it was fun to be with him while he was doing that, but I was doing this," McCarthy said, gesturing downward.
McCarthy spent much of the rest of that season at Cedar Rapids. He also got some time back at single-A Charleston. It was the next spring that he was let go.

He ended up taking about a month off and he then took one more shot. He got an offer from the Indians. They needed a left-handed reliever at AAA Colorado Springs. McCarthy signed, but he never made it there.

He hadn't pitched enough and his speeds uncontrollably varied. "When you don't know how fast the ball's coming out of your hand, it can get a little dangerous standing 60 feet, 6 inches away and some guy's hitting bullets off you."

The Indians then made a trade and McCarthy was sent home. There were possibilities to continue, but none at AA and that was it.

Eventually a friend got him into a computer hardware job that took him to England. That's where he met his wife, Virginia-native Courtney. They've been married for 11 years and have two boys, Ford, 8, and Grayson, 7. They now live in the Boston area, McCarthy running his computer hardware consulting business.

McCarthy has also gotten back into baseball through his sons. He's been coaching their teams, the first- and second-grade teams the last two years. It's something he said has been a lot of fun.

At one point earlier in the interview, 8-year-old Ford came by. The dad asked if he was having fun just then. Ford responded that he was.
"He's a good ball player," the proud father said after Ford moved on. "He's a power hitter. My little guy (Grayson) has a cannon."

His baseball advice to them, he said, consists of one or two thoughts and he lets them go.

Coaching his kids' teams in general, McCarthy called it phenomenal.

"I get a big charge out of really helping the kids who struggle," McCarthy said, "and watching how proud they are of themselves when they hit the ball or catch the ball. It's exciting."

Regarding his own playing career, McCarthy recalled it not only shaped that part of his life, but he believes it's helped shape it since.

He's since used those experiences to his advantage, he said. "I like to say that one of the reasons I've been so successful in business," he said, "is because of baseball."