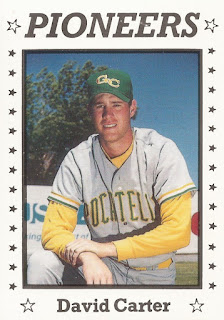 "I feel like one of the biggest reasons I was drafted is that Dave was helping me with my off-speed pitches," Mangum told The Review in 2013, as he wrapped up his second season. "I was able to develop a slider with him and I think that's what caught the attention of a few scouts that had been looking at me during the time. He really helped me improve and understand the game."

Carter coached Mangum at both Utah Valley and earlier at the College of Southern Idaho. Those coaching stints were part of a long coaching career for Carter, one that stretched almost back to the end of his own brief professional career.

Carter's career began in 1990, signed by the Expos out of UNLV. He went to UNLV out of the College of Southern Idaho. Carter is also known simply as Dave Carter.

At Southern Idaho, Carter made the All-Region team as a pitcher in 1987, picking up nine wins on the year. At UNLV, Carter helped his team to the 1988 regional, but took the loss in the elimination game.

With the Expos, Carter played his first season at rookie Gate City. He got into 26 games in relief, with a  6.15 ERA. He then moved to independent short-season Erie for 1991, getting into 21 games, with a 5.17 ERA. That second season was his last as a pro.

Carter soon started his coaching career. He got his first coaching job in 1994, at Southern Utah University as a graduate assistant, according to his Utah Valley bio. He then moved to Southern Idaho and then Eastern Utah.

"It's exciting to be back at Utah Valley and to be working with Coach (Eric) Madsen again," Carter was quoted by the school as saying upon his return. "It's good to be in an environment like this with the potential that is here."