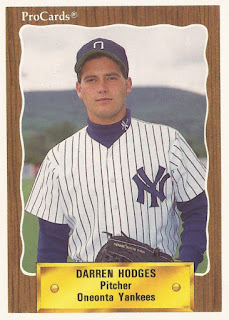 Darren Hodges improved on the mound in 1993 and it showed on the field, according to The Schenectady Daily Gazette.

Hodges' pitching coach Dave Schuler told The Daily Gazette in late May why Hodges had improved.

"His execution has been outstanding," Schuler told The Daily Gazette. "He's really coming into his own as a pitcher. He understands which pitches compliment each other."

Hodges appeared to come into his own that year, his fourth season as a pro. He went on to get into one more season, before abruptly retiring and ending his career in May 1994.

Hodges' career began in 1990, taken by the Yankees in the 10th round of the draft out of Ferrum College in Virginia.

Hodges split 1992 between Fort Lauderdale and AA Albany-Colonie. His time at AA saw his ERA balloon to 6.05.

Then came 1993, when his first half seemed as good as any other. He came on that April as an unexpected starter. He'd been pegged to come in in relief. His first win came on a five-inning outing, The Daily Gazette wrote.

"Last year here, walks killed me," Hodges told The Daily Gazette after that first win. "Once you get guys on base, you've got to go to the fastball, especially up here in AA. When you know it's coming, it's not hard to hit it."

By mid-July, Hodges was 8-4. He got his eighth win after a poor outing at Bowie. Hodges told The Daily Gazette he had the bad outing and moved on.

"Nothing bothers me at all now," Hodges told The Daily Gazette. "I'm a little bit more settled down now. I have a wife, and it makes it easier to go home after a game like that."