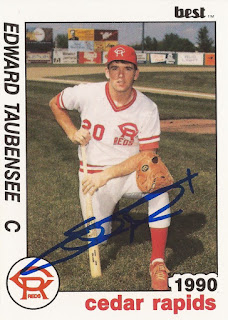 Eddie Taubensee made the majors in 1991. His bat didn't seem to make the trip with him, at least early on.

Called up that May when Indians catcher Sandy Alomar got injured, Taubensee went 0 for 10 over his first five games. He extended that start to 0 for 13 in June. His opening hitless streak continued into his next call-up in September.

"I was definitely pressing," Taubensee recalled recently to The Greatest 21 Days. "I wanted to get that first hit. I think I was 0 for 23 when I got my first hit. That was a huge relief."

He also went on a nine-game hitting streak. By the time the season was over, he had taken that early .000 average and turned it into a more respectable .242 mark.

"Once I got that first hit," Taubensee said, "I got more relaxed."

After that first major league hit, Taubensee went on to get nearly 1,000 more over a career that spanned 11 seasons.

Taubensee spoke to The Greatest 21 Days recently by phone from his home in Florida. He spoke after taking part in the May Hall of Fame Game in Cooperstown.

His major league debut came in his sixth professional season, after being drafted by the Reds directly out of high school in 1986.
That debut also came a season removed from Taubensee playing at single-A Cedar Rapids. His quick path from there to the majors began in that December's minor league draft.

That's when the Athletics selected the unprotected catcher and brought him to the Oakland organization. He stayed there through spring training. The team wanted to send him down, but had to sneak him through waivers first. It didn't work. The Indians spotted him.

"That was neat," Taubensee said. "I went from A-ball the year before and now I'm in the big leagues for four days with the Indians."

The team held him with the big club to make sure they could send him down. It worked and he arrived at AAA Colorado Springs.

"It was different," Taubensee said of his first four days in the majors, "because I was moving around whole lot. But, you know what? I was happy. I was in the big leagues. I was young and when they put me in AAA, it was OK. I was playing baseball."

He also got the chance to show he could play at that level. Being at AAA also meant he was right there when the Indians needed an injury replacement. Alomar got hurt in May and Taubensee got his chance.

Colorado Springs manager Charlie Manuel broke the news and Taubensee was off to Cleveland. His debut came against the team he'd spent the spring with, the Athletics.

"It was pretty exciting," Taubensee said. "It was like a blur though."
Taubensee went 0 for 3 in that first game. He returned to Colorado Springs after a five-game run. He recalled not being disappointed at being sent back down. He knew when Alomar got off the disabled list, that would happen. He would go back down to AAA and play.

He returned to Cleveland for three games in June, then came back as a September call-up.

His first major league hit finally came Sept. 23 at Detroit. It was his 13th major league game. In the top of the seventh, facing eventual 20-game winner Bill Gullickson, Taubensee "hit a little flare" over short and his first hit was in-hand.

Taubensee said he knew he wasn't going to be a Gold Glove catcher, but he believed he was going to be a good catcher and a good hitter. But he needed something first.

Taubensee picked up a total of 16 hits for the Indians down the stretch, 14 of those coming in that nine-game hitting streak that followed his career-opening hit drought.

That December, the Indians shipped Taubensee in a four-player deal to the Astros. One of the two players going the other way was Kenny Lofton.
The Astros were moving Craig Biggio out from behind the plate to second base. They had a right-handed hitting catcher in Scott Servais. What they wanted in Taubensee was a left-handed hitting one.

"It felt good," Taubensee said. "I was playing part time. Even though it's not every day, it's really consistent playing time and I really enjoyed it. Like every player I wanted to get a chance to play more and more because I knew I was capable of doing better than what I was doing if I got more playing time."

Taubensee started 1994 back with the Astros. In mid-April, the club sent him on to the Reds in another trade. It was a return to the team that had originally drafted him.

Taubensee had not only returned to the Reds, but he also hit better. In 61 games with the Reds that year, he hit .294 with eight home runs.

"The years I was with the Reds were the best playing years of my career." (Go to Part 3)