Hall of Fame 2015: Pedro Martinez, For Everything 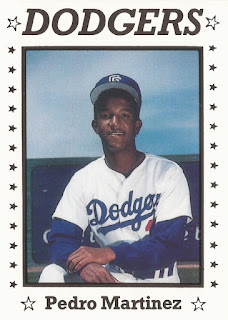 When I interviewed Dave Wheeler earlier this year, the topics of conversation were limited. That's because his pro career was brief, just a single season.

But that's the nature of this project. I research - and sometimes interview - guys like Wheeler, who played a single season as a pro. I also research the rookie Pioneer League players he played against in that season, as well as the hundreds of others who played the game that year.

One of those players Wheeler played against was none other than Pedro Martinez. That's future Cy Young winner, World Series winner and Hall of Famer Pedro Martinez. Wheeler recalled Martinez well.

"It was really kind of amazing how hard he threw," Wheeler told The Greatest 21 Days then. He also recalled getting beaned by Martinez.

"He had that moxy to him for a young kid," Wheeler continued. "He had a lot of polish, a lot of confidence."

Martinez has yet to be featured here. He played for the Great Falls Dodgers, who had a team set that I won't be getting to for a while. But, knowing that I would be getting to his career, I went down to Cooperstown with my wife for his induction ceremony.

It was the third ceremony we've been to. We went to Andre Dawson's in 2010 and Frank Thomas' in 2014. Thomas was the first minor league player from 1990 to be inducted into the Hall.
The cool thing about Martinez is that he brought so much energy with him. Being the second Dominican inducted, there was a large contingent of flag-waving Dominicans cheering at every mention of his name. There was also a smaller contingent of fans from Montreal making their voices heard.

Martinez acknowledged both, his Dominican brethren especially. To the Expos fans, Martinez said, "Montreal, I hope you get a team pretty soon."

He addressed his Dominican countrymen on several occasions, including a lengthy segment in Spanish. He summarized his Spanish portion in part by stating the obvious, "I feel proud to represent the Dominican Republic."

"I would like all of you," Martinez said at another point, to not look at me as numbers, as baseball, as achievements. I would like you to actually see me as a sign of hope for a third-world country, for Latin America, someone that you can really look up to and feel comfortable enough to say, I’m proud of you."

The other cool thing I didn't even catch until I saw a partial transcript and then listened to that part of Martinez' speech again. He reached back to his time in Great Falls in 1990 and remembered his host family.

"I have to thank the Haffner family who were the ones that introduced me to the United States, all the way in Great Falls, Mont.," Martinez said, thanking them again.

At another point in his speech Martinez simply summed up his feelings by admitting that he might not be able to sum up them all.

"There are so many things I would like to say, that I don't know if will find the words in Spanish or English, but my God, I'm Thankful. I'm thankful for everything."

More pictures from the 2015 Hall of Fame Induction: