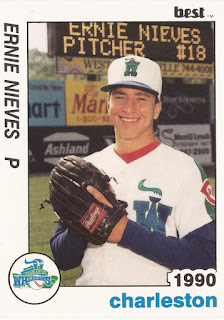 Ernie Nieves started strong this game in 1991. Through four innings, he hadn't given up a hit, according to The Sumter Item.

Nieves, though, didn't get the opportunity to see how far he could take that early no-hitter. That's because the rains came.

Nieves was playing that May for single-A Charleston, in his third professional season. He went on to play professionally in 11 total seasons, never making it higher than AA.

Nieves' career began in 1989, the Brooklyn-native signed by the Reds as an undrafted free agent. Nieves is also known by his formal name, Ernesto Nieves.

With the Reds, Nieves began in the rookie Gulf Coast League, getting 25 relief appearances and posting a 2.27 ERA.

For 1990, Nieves moved to rookie Billings and single-A Charleston. Nieves ended up staying at Charleston through 1992, his final year with the Reds organization.

After not being recorded as playing in 1993, Nieves joined the Angels system for 1994 and 1995, playing at high-A Lake Elsinore and AA Midland. His stint at Midland, his last in affiliated ball, consisted of six outings, one start and a 4.05 ERA.

It was in 1997 that Nieves started the second half of his career, in independent ball. That year, he signed on with independent Saskatoon, of the Prairie League. Nieves went 10-1, with a 2.45 ERA over 15 outings, nine starts.

He moved to independent Bridgeport for 1998, staying there into 2000. After finishing out 2000 with Lehigh Valley, Nieves finished out his career in 2001 with five final outings with Albany-Colonie.