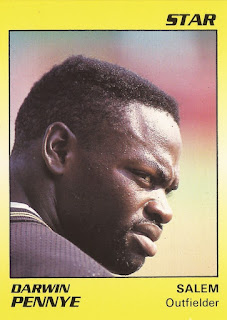 One of Darwin Pennye's earliest memories in baseball centers around playing catch with his dad, he told an audience in 2013.

Pennye was 4 years old and he decided he wanted to play, so he got a glove and a ball and he and his dad played catch. Confident in his son's abilities, Pennye recalled his father soon threw one a little too hard, hitting Pennye square in the forehead, he told the audience.

"My father said, 'Lord have mercy, I've ruined him. He'll never play baseball again,'" Pennye recalled as he gave his testimony during Chapel service at Bay Area Christian School, where he served as director of athletics. "Fifteen minutes later, I was playing again."

From that young start, Pennye went on to a career as a pro. His career spanned five seasons, Pennye getting as high as AA. He has since gone on to a career as a coach and athletic director. Most recently, Pennye has taken a new job in summer 2015 as director of athletics at Logos Preparatory Academy in Sugar Land, Texas.

Pennye's baseball career began in 1988, taken by the Pirates in the 37th round of the draft out of Texas State University.

Pennye spent his first year at short-season Watertown. He hit .314 over 72 games. He also stole 22 bases. He picked up three hits, one on a home run, in an August game.

Pennye returned to Salem for much of 1990. He also got 11 games at AA Harrisburg. He hit a home run in an August game to help Salem to a win.

He then spent 1991 completely at AA for the Pirates, at Carolina. He hit .2357, with 19 stolen bases. He had three hits in a May game. It was his final season in the Pirates organization.

That December, he was taken by the Cubs in the minor league draft. He moved to the Expos system for the season, playing the year back at AA Harrisburg. He hit .273 there, with 20 swipes. It was his final season as a pro.

Pennye has since moved into his second career. He's credited as coaching in 1998 and 1999 at short-season Auburn in the Astros system. He has also served as an instructor.

In 2004, he became baseball coach and athletics director at Bay Area Christian School. He also served as football coach. His team entered the 2009 season as three-time district champions. Pennye told The Bay Area Citizen that August that he looked forward to his team trying to defend those titles again.

"I like the fact we have the target on our backs," Pennye told The Citizen. "It's better than being on the opposite side of things. Everyone knows we have lost a lot, but our goal this season is not to let our program go backward."

Pennye is now serving in 2015 as athletic director at Logos Prep outside Houston.