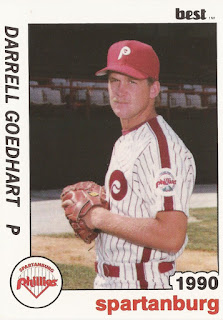 By 1997, he was back in independent ball, getting 10 starts at Grays Harbor, picking up a June win against Mission Viejo. Goedhart is last recorded as playing in 1998, his 10th season as a pro. He split that year between Grays Harbor and independent Sonoma County, ending his career.