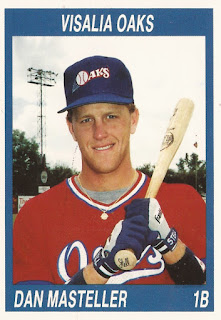 Dan Masteller came up in a bunting situation, a tie game in the bottom of the ninth, runner on first, with nobody out.

Instead, the rookie hitting below .200, was given the green light. And, in this July 1995 game, he hit his first major league home run, a walk-off.

"It's days like this," Masteller told The Associated Press afterward, "that make coming to the ballpark when you're struggling so much better."

Masteller's career began in 1989, taken by the Twins in the 11th round of the draft, out of Michigan State.

He played his first year between rookie Elizabethton and single-A Visalia, hitting .269 between them. He returned to Visalia for 1990, then hit AA Orlando for 1991.

At Orlando, Masteller hit .246 his first year and .263 his second. He returned to AA with the Twins in 1993 at Nashville, getting 39 games there. In April, It was a Masteller home run that gave Nashville a lead over the new Orlando Cubs in Orlando.

"All I wanted was the ball up in the zone," Masteller told The Orlando Sentinel. "He threw a changeup, and he got it up a little bit. I love playing here. This field has the best lights in the Southern League."

Also that year, Masteller got his first time at AAA Portland, getting 61 games there and hitting .322. Masteller stayed at AAA with the Twins for 1994, moving with the team to Salt Lake.

He finally debuted with Minnesota in June 1995. He eventually got into 71 games for the Twins, hitting .237. In one July game, Masteller tied the game twice with RBIs.

"We turned it up a notch and took advantage when their pitching lapsed," Masteller told The Associated Press after that contest.

Masteller's final major league game came that Oct. 1. He played just one more season as a pro, 44 games with the Expos at AA Harrisburg and independent Massachusetts, ending his career.