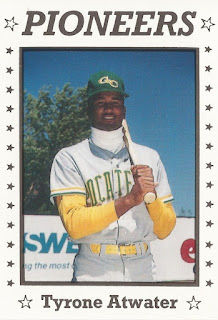 That perfect record also included a state championship, the North Carolina school's second in its history, the Hendersonville Times-News wrote.

Atwater's work at Southern Alamance also caught the attention of scouts, with Atwater turning pro directly out of high school.

As a pro, though, Atwater couldn't continue that success. He played just three seasons, never making it above rookie ball.

Atwater's career began that year in 1988, taken by the Expos in the 15th round of the draft, out of Southern Alamance. Atwater is also sometimes referred to by his given name, Tyrone Atwater.

With the Expos, Atwater started in the rookie Gulf Coast League. The infielder got into 44 games, hitting .304. In a late-August win, Atwater went 2 for 6.

Atwater moved to rookie Gate City in the Pioneer League for 1990. In 59 games there, his averaged dipped to .245. He hit one home run and knocked in 16.

Atwater remained in Gate City for 1991, the team renamed for its home city, Pocatello. In 48 games, he hit .307, singling and scoring in a late June game. That season for Pocatello, though, was Atwater's final season as a pro.

Years later, in 2013, Atwater's 1988 Southern Alamance state-championship team was inducted into the school's Hall of Fame.