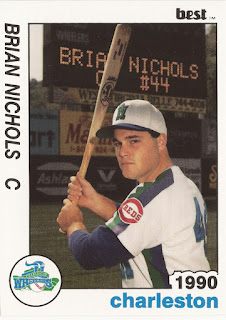 Brian Nichols tied up a game in early August 1989, hitting a double for the rookie Billings Mustangs.

The RBI was one of 18 RBIs the catcher got that year in 39 games for the Mustangs. The double was one of nine or Nichols.

For Nichols, though, he would never get the opportunity to do either in the majors, his career ending after just three seasons, never getting above single-A.

At USC, Nichols was a first-team All-Conference selection in 1987 and lettered all four years he was there. He was also a pitcher, one who spent time as a catcher.

Turning pro, Nichols started as a pitcher, playing at rookie Billins. In 17 relief outings, Nichols went 1-2, picking up three saves. His ERA, though, hit 6.87 over 36.2 innings.

For 1989, Nichols moved to catching. Over 39 games, Nichols hit .267. He returned for 1990, playing the season between three teams, Billings, single-A Charleston and single-A Cedar Rapids. Between them, he got into 70 games and hit .248.

For Nichols, though, those 70 games weren't enough for him to continue his career, his three seasons marking the extent of his professional stint.