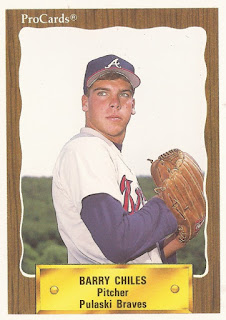 Barry Chiles started off this August 1992 game a little shaky, according to The Washington Post. Perhaps he could be forgiven, though, Chiles was pitching in front of the leader of the free world.

Chiles took the mound for the high-A Durham Bulls and ultimately threw six innings of shutout ball at Frederick for the 4-0 win. In the stands at Frederick were George and Barbara Bush, The Post wrote.

Chiles pitched in front of the first couple in his fourth professional season. He returned to Durham for 1993, but that was his last season as a pro. He never made AA.

Chiles' career began in 1989, taken by the Braves in the 33rd round of the draft out of East Wake High School in North Carolina.

Chiles played his first season in the rookie Gulf Coast League. He got into three games there, giving up one earned in six innings of work.

At Durham in 1992, Chiles got to participate in a rare feat. He was one of four pitchers to combine for a no-hitter in mid-April. Chiles pitched a perfect inning.