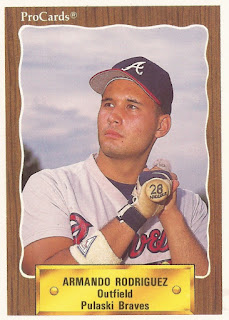 The College of San Mateo has sent players to the pros nearly every year since at least 1962, according to the school's site.

In many of those years they sent a single player on to the pros. In others, they sent more. But the 1990 San Mateo season is in a class all its own.

After the 1990 San Mateo season, a total of six Bulldogs advanced to the pros, the most of any year on the college list. Among those six was Armando Rodriguez.

Rodriguez went on from San Mateo to the Braves organization. His pro career, though, was brief. He played just two seasons.

Rodriguez' career began that year in 1990, taken by the Braves in the eighth round of the draft out of San Mateo. He played his high school ball at Burlingame High in California. His name has also been spelled Armondo Rodriguez.

Rodriguez started with the Braves at rookie Pulaski. He got into 46 games mostly in the outfield. He hit .277 with two home runs and 19 RBI.