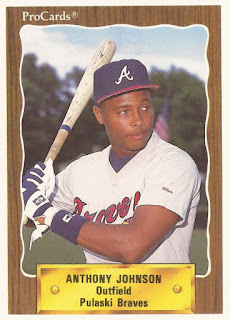 The list of Huston-Tillotson College alumni is long, about 22 names in total. The list is of the school's baseball players who went on to play in the pros.

It includes a Baseball Hall of Famer in Negro Leaguer Willie Wells. The most recent entries are from 2010 as two Huston-Tillotson alums went on to play independent ball.

There are three entries on the list from 1990. One of those is Anthony Johnson. He's listed as signing with the Braves.

Johnson did sign with the Braves, but his stay with them was brief. He played a single season, 47 games.

Johnson's pro career began and ended that year in 1990, taken by the Braves in the 63rd round of the draft out of Huston-Tillotson. Johnson played his high school ball at Kashmere High School in Houston.

Johnson played his season with the Braves at rookie Pulaski. He got into 42 games and hit .223. He hit two home runs, had 13 RBI and stole five bases. It was the extent of his professional career.