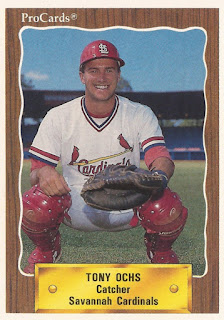 A native of Indiana, Tony Ochs went off to college in Illinois, at Southeastern Illinois College and he brought his bat with him.

The catcher batted a .531 at Southeastern, earning the title of the nation's community college batting champ, according to Southeastern. He continued after moving on to Memphis State.

It was enough for Ochs to get noticed by the Cardinals, taken in the fifth round of the 1989 draft. But he never found his bat with St. Louis. He also never saw AA, let alone the majors.

In another game, a conference tournament game in May 1989, Ochs' home run was the only earned run off of Florida State's strong starter, according to the Orlando Sentinel. In all, he hit 13 home runs for Memphis State that year.

With single-A Savannah, Ochs fared little better. He hit .248 with three home runs in 102 games. In an April game, Ochs' single and run scored helped Savannah to a 7-2 win. In a July game, Ochs hit a two-run single on an 0-2 count, helping Savannah to a 9-1 victory, according to the Spartanburg Herald-Journal.

According to Southeastern Illinois College, Ochs returned home to Montgomery, Ind., to start a family. He remained there, as of 2007, as a coal miner and heavy equipment operator. It was that year that he was inducted into the Southeastern Illinois College Hall of Fame.
1990 CMC-Pro Cards Tally
Players/Coaches Featured: 2,055
Made the Majors: 906-44.1%
Never Made Majors:1,149-55.9%
5+ Seasons in the Majors: 386
10+ Seasons in the Minors:222
Posted by Steve78 at 1:00 PM