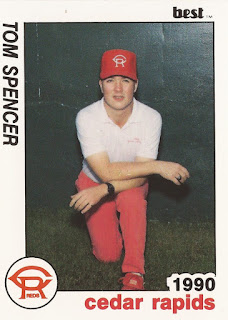 The team's star player went down with a knee injury, leaving practice on crutches. Watching over the injury, insuring it was cared for properly, was team trainer Tom Spencer.

"When someone goes down, there's question marks in everybody's mind - the coach's mind, the player's mind, the trainer's mind," said head coach Brian Agler told his team's site afterward. "So we went through the process of the X-Rays and the MRI and seeing the physician and everything's come back pretty clean, so it's really a day by day-type thing."

This was 2008 and Spencer had already spent more than a decade serving as an athletic trainer in minor league baseball.

By 2008, though, Spencer was in the second year of his new job - as head athletic trainer for the Seattle Storm, of the WNBA. The player he worked to patch up after that July practice was star Sheryl Swoopes.

Spencer started his career as a trainer in 1988, with the Brewers, working that summer rookie ball. He moved to the Reds system in 1989, serving as trainer for the single-A Cedar Rapids Reds, returning there for 1990.

Over the next decade, Spencer stayed with the Reds, serving as trainer as high as AA.

Spencer previously graduated from Central Washington University with a degree in individualized studies, focusing on sports medicine and adaptive physical education, according to the Storm. In 2002, he went back to school to become a physical therapist.

He also returned home to the Seattle area, working with Peak Sports and Spine Physical Therapy. In 2007, he got another hometown job, with the Storm. It's a job he still holds in 2012.

In 2010, Spencer helped keep the Storm healthy enough to win the WNBA championship, an honor that got the team, and Spencer, a trip to the White House to see President Obama.