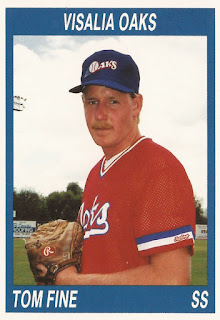 Tom Fine ended up losing his 10th start that June and his manager attempted to explain to The Newport News Daily Press how it happened.

Where manager Jim Thrift focused was the beginning - three hits from the first three batters Fine faced, a barrage that resulted in two runs.

"He lost some concentration when they got the runs off him," Thrift told The Daily Press. "He was a little out of sync and they capitalized."

Fine ultimately went 0-11 for Peninsula, but went 3-3 in the remainder of the year with the Mets at single-A Columbia. The season over, Fine would get just three more outings. He also would never make it to AA.

Fine's career began in 1986, taken by the Mets in the sixth round of the June secondary draft, out of Northeast Oklahoma A and M College.

In late June, Fine came into a game with a large lead. In two-thirds of an inning, though, he gave up four runs, two of them earned, according to The Charleston News and Courier.

"We were just trying to get some pitchers some work," Columbia manager Bill Stein told The News and Courier. "You figure with a 9-1 lead, everything was safe."

Fine's team ended up holding on for a 9-8 victory. Fine's career, though, was short. The season over, Fine signed with the Twins. Assigned to high-A Visalia, Fine got only three outings, giving up three earned runs in 5.1 innings of work, ending his career.