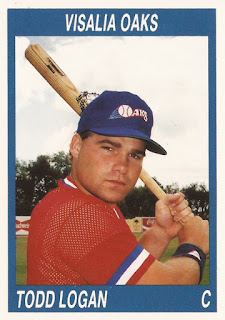 Playing first base for Eastern Washington University in May 1989,  Todd Logan used the confusion caused by a dropped pop-up bunt to race across the diamond to beat the Gonzaga runner to third.

It was a play praised by both sides afterward, preserving a ninth-inning tie in a game where Logan also received praise for his bat, scoring the game-winning run in the 10th inning, according to The Spokane Spokesman-Review.

"That was the game," Gonzaga coach Steve Hertz told The Spokesman-Review of Logan's ninth-inning defensive play. "He's a tough kid and a great competitor. He never quits."

Logan took that toughness on to a pro career, starting that next month in the Twins organization. That toughness, though, could only take Logan to four seasons as a pro, never making it above AA.

Logan's pro career began in June 1989, taken by the Twins deep in the 57th round of the draft.

With the Twins, Logan started at single-A Visalia, playing catcher. There, he hit .313 in 45 games. In a late-August game, Logan knocked a two-run home run to give Visalia a lead. Logan also took advantage of a mistake from the opposing pitcher.

"It was a fastball that was supposed to go up and in," Modesto pitcher Bill Taylor told The Modesto Bee of Logan's home run. "It got too far over the plate. It p---d me off."

In 1991, Logan only got into 69 contests on the year, but 18 of those were at AA Orlando. The rest were back at Visalia. In 18 games at Orlando, Logan hit .184. In mid-August, he also tried to snag a wild pitch and injured his thumb.