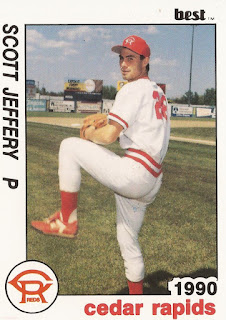 When Scott Jeffery took his new job in January 2011, he told the local paper about the time he worked to make his high school baseball team.

He made it, he told The Scranton Times-Tribune, by working hard and putting in all his effort, 100 percent of it.

"I think it's deep down the thing that drives me the most," Jeffery told The Times-Tribune. "If you put 100 percent into whatever it is you're trying to accomplish, you'll get it done."

Jeffery spoke to The Times-Tribune on the occasion of his appointment as superintendent of the Old Forge  School District near Scranton. He'd been in education since 1992, teaching his way up from chemistry to administration.

Before that tenure as an educator, Jeffery's career was in baseball. It was a short career for Jeffery, just four seasons. He made AA in two of those seasons, but he never made it higher.

Jeffery's career in baseball began in 1987, taken by the Reds in the 16th round of the draft out of Mansfield University of Pennsylvania. He went to Mansfield out of Hornell High School in western New York. Jeffery's full name is Richard Scott Jeffery.

Jeffery played his first year in the rookie Gulf Coast League. The right-hander got into 26 games in relief, posting a 2.92 ERA. He saved nine games.

He moved to single-A Greensboro for 1988. In 38 relief outings, he turned in a 1.30 ERA and saved six. The pitching of Jeffery and and the team's closer were credited with helping the team to the second-half title.

Jeffery continued his good pitching the next year at single-A Cedar Rapids. He went 11-3 in 14 starts there, with a 2.04 ERA. That June against Peoria, he threw a complete game to run his record to 10-1. It was one of four complete games he threw for Cedar Rapids.

Jeffery again split time between Cedar Rapids and Chattanooga in 1990. He spent most of his time at Chattanooga, 31 outings, nine starts. He went 3-6, with a 4.10 ERA. It was his final season as a pro.

Jeffery then started his second career, the one in education. He started as a chemistry teacher in Baltimore, according to The Times-Tribune. He then became a science coordinator, assistant principal, principal and then, in 2011, a superintendent.

In July 2013, Jeffery became superintendent of the Lakeland School District north of Scranton.

"My philosophy is really pretty simple," Jeffery told The Times-Tribune. "I just want kids to be better in life, to learn, grow and be successful."