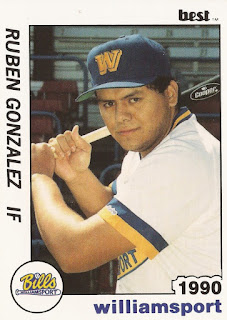 Ruben Gonzalez did well his first two seasons in the Mariners' organization, at short-season and single-A, hitting over .300 both years. His third year, though, he stayed at single-A, at San Bernardino.

The problem was, The Los Angeles Times wrote, was that Gonzalez was a first baseman. The Mariners had three first basemen ahead of him, including Seattle's Alvin Davis and their AA first baseman Tino Martinez.

"I really can't worry about what other people are doing," Gonzalez told The Times of the log jam. "I just have to go out and do the best I can. I'm enjoying myself. This is what I've always wanted to do."

Gonzalez did do the best he could. He went out and won the California League Triple Crown. But, after an early injury in 1990, Gonzalez couldn't keep a 1990 promotion to AA. His career ended the next year, after five professional seasons, never making AAA, much less the majors.

Gonzalez' career began in 1987, taken by the Mariners out of Pepperdine. He played that first year at short-season Bellingham, hitting .304 with seven home runs.

Moved up to AA Williamsport for 1990, though Gonzalez' stay was short. In seven games, Gonzalez got just four hits in 21 at bats. His stay, though, was cut short swinging the bat. He broke his wrist, The Times wrote.

When he returned, he returned to San Bernardino. In 44 games there, he heated up again, hitting .336 with five home runs and 26 RBIs. He hit one of his home runs July 29.

But Gonzalez could replicate that success in AA. In 1991, playing for AA Jacksonville, Gonzalez hit just .237 in 94 games, ending his career.