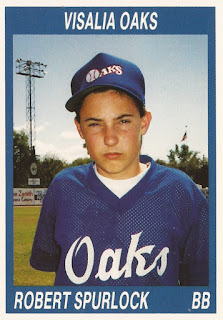 Robert Spurlock was only a freshman in high school in 1990, but he was already well acquainted with baseball.

That's because the kid from Hanford, Ca., had the opportunity to head down the road a few miles to Visalia and serve as a bat boy for the California League's Visalia Oaks. The 1990 season was actually Spurlock's fourth summer with that job, according to the back of his Cal League card.

For Spurlock - as it might be for any kid in his position - it was more than a job. He got to hang out with real pro athletes.

"He says the thing he enjoys most," the back of his Cal League card reads, "is the friendships he has made with the players."

Spurlock was one of two bat boys to get cards in the Cal League set. Jason Elick was the other. The set also contained the team's general manager, groundskeeper and other support staff.

Spurlock appears to have gone on from Hanford High to the College of the Sequoias and to jobs in the energy industry, according to a LinkedIn profile that appears to be his.

He does not appear to have gone on to play baseball himself. A check of the College of the Sequoias all-time roster shows no one by his name having played at the school.

Spurlock's high school Hanford High has produced its share of major leaguers. Baseball-Reference shows five players from the high school have made the major. That list includes Tim Scott, interviewed here in 2012. 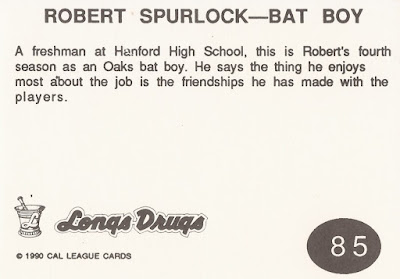