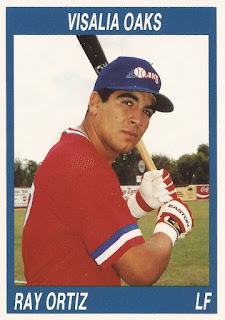 "I have been on winning teams for as long as I can remember,'' Ortiz told The Sentinel in July. "Perhaps the last time I was on a losing team was during my high school days. It sure makes the game more fun when you are playing for a team that's in the hunt for a championship."

Ortiz made AA quickly in 1990, only a year after being taken by the Twins in the seventh round of the 1989 draft. But, despite his success on winning teams in 1990, Ortiz never found himself on a winning team - or any team - in the majors.

In a career that spanned seven professional seasons, Ortiz made it to AAA, but he never took that next step to the majors.

Taken by the Twins out of Oklahoma State, Ortiz played his first professional season at single-A Kenosha. There, he hit .246 with three home runs.

Two of those home runs came in Orlando's first-half clinching game in June. One of them was a grand slam, The Sentinel wrote.

"They told me before he got here that he has a quick bat, and I saw it,'' Orlando manager Ron Gardenhire told The Sentinel after that game.

Ortiz stayed in Orlando for 1991, hitting just .247, with nine home runs. An Ortiz single in August tied a game Orlando went on to win. "That was a very big hit,'' Rays manager in 1991 Scott Ullger told The Sentinel of the game-tier. "Ortiz just reached out on a breaking ball and punched it over second."

Ortiz got his first look at AAA in 1992, with 42 games at Portland. He hit .328 and returned to Portland for 1993. He hit .283 in his first full season in AAA. In June, he hit a three-run home run to help Portland to a comeback win. It was one of five home runs he hit on the year, his final year in the Twins organization.

For 1994, Ortiz played with the Giants, at AAA Phoenix. The Giants were Ortiz' hometown team. He grew up in San Francisco. In spring 1995, Ortiz returned to the Giants, as a replacement Giant.

"I've been to big-league camp," Ortiz told The Examiner. "I've put in my work and played with major-league players. I know the difference. But this game is a game of opportunities. Maybe I'll open some eyes."

The strike over, Ortiz returned to Phoenix. He finished out the year - and his career - in independent ball at Lubbock, without making the majors.