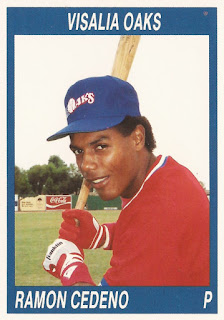 Ramon Cedeno's team was up by two when he came to bat. When he returned to the dugout, that Abilene Prairie Dog lead had been extended to four, on Cedeno's 12th home run of the year, according to The Abilene Reporter News.

"Every time I step to the plate, I just try to hit the ball hard and look for a good pitch to hit," Cedeno explained to The Reporter News in August 1998. "Tonight, it was like my lucky night."

Cedeno's professional career began back in 1987, signed by the Astros as an undrafted free agent out of his native Dominican Republic.

For 1989, Cedeno moved to single-A Osceola, keeping his average above .300, hitting .303 in just 67 games. That September, Cedeno was sent to the Twins with another player, completing an earlier deal that sent Steve Lombardozzi the other way.

With the Twins, though, Cedeno only lasted a year. Sent to high-A Visalia, Cedeno hit .281 over 91 games. He's not recorded as coming back for 1991.

Cedeno did come back, though, but not until 1995. He played that year in the independent Texas-Louisiana League between Pueblo and Mobile. In 97 games the then-28-year-old hit .337.

Earlie in that August with Abilene, Cedeno addressed a spate of injuries hitting the club. To The Reporter News, Cedeno suggested players just had to play through the nagging ones.