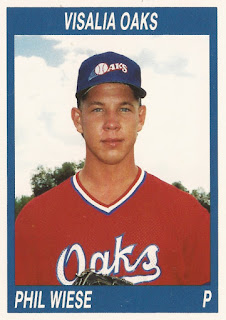 Phil Wiese had breezed through rookie ball and single-A, going 10-0 one year and 10-4 the next. But AA in his third season proved a challenge. He started of 1-4 for Orlando in 1991. But it was nothing a little hitting couldn't help.

"I've been in a slump," Wiese told The Orlando Sentinel in May, after an Orlando 12-3 victory over Birmingham, ''but it's easy to pitch when you get 12 runs.''

Weise got the win that night, one of six wins he got on the year. They would also be his last wins, a torn rotator cuff forcing an early end to his baseball career after just three seasons and an early start to Weise's new career, in golf.

Wiese's short career began in 1989, taken by the Twins in the 25th round out of the University of New Orleans. Before New Orleans, Wiese played two seasons for Lincoln Land Community College, posting an ERA in 1986 of 2.04 and an ERA in 1987 of 1.91. He also got 19 strikeouts in one game and made the Lincoln Land Hall of Fame.

At New Orleans, Wiese took a no-hitter into the seventh of a May 1989 game against Texas. Taken by the Twins that June, Weise played the season at rookie league Elizabethton. He went 10-0 with a 2.48 ERA in 13 starts. He also struck out 101.

The next season, at single-A Visalia, Wiese continued where he left off at Elizabethton. He went 10-4 with an ERA of 2.52, striking out 95.

For 1991, Wiese got that promotion to AA Orlando. His first start was a quality one, giving up one earned run in six innings. But he also walked five, according to The Sentinel.

"I was a little nervous at the beginning, trying to get settled in, but I thought I threw the ball well,'' Wiese told The Sentinel.

By year's end, the Sunrays were in the playoffs and Wiese helped them to within one game of the championship with six innings of shutout relief, ending his career.

Wiese picked up again where he left off, with golf. He returned to golf, sport he'd played in college, according to The Springfield State Journal-Register. Most recently, he's served as Director of Golf at a course near San Antonio.

"I'm comfortable and where I want to be. In the position I'm at, within the ranks of golf pros, I'm one of six who do what I do in my company. The home office is of no interest to me," the Springfield native told The State Journal-Register this past April. "I enjoy and appreciate interaction with members, giving lessons, being involved in tournaments."