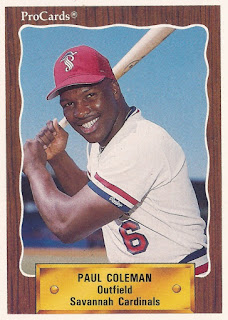 In one workout, high schooler Paul Coleman showed off a stroke that sent seven of 10 pitches out for home runs, The South-Florida Sun-Sentinel wrote.

One writer projected Coleman going fifth overall. The Cardinals were impressed enough with Coleman's work that they selected him one pick later at sixth, just ahead of Auburn infielder Frank Thomas.

"We've been looking for a power hitter and we think Coleman is the type," Cardinals scouting director Fred McAlister told The AP. "He's built along the lines of Bo Jackson."

Despite the early shows of power as a high schooler, Coleman could never show that power in the pros.

The first round pick lasted just six seasons in the minors, making it to AA, but never making it to the majors.

Coleman's career started that year in 1989, selected by the Cardinals out of Frankston High School in Texas.

The Cardinals hadn't taken an outfielder in the first round in a decade. They hadn't taken a high schooler that early in nearly as long. Coleman was surprised by the pick.

"I lost my breath when I heard," Coleman told The AP after his selection. "I figured I'd go somewhere, but I didn't think first round."

Coleman had committed to attend the University of Texas, but he instead chose the pros and a $160,000 signing bonus.

With the Cardinals, Coleman started at rookie Johnson City, and it was a slow start. He got just four hits in his first 28 at bats. By August, Coleman was still hitting just .212. He'd also suffered a bout with knee tendinitis.