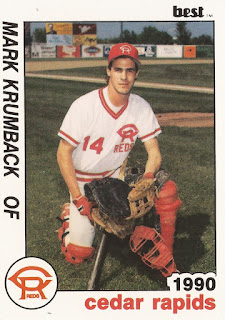 For Mark Krumback, his college coach's small-ball philosophy at the University of North Alabama fit him and his teammates that year in 1987 perfectly, he told The Florence Times Daily.

"I like that kind of baseball," Krumback told The Times Daily that May. "I've never really been much of a power hitter. I'm more of a singles and doubles type hitter. We've got a lot of guys on the team who hit like that."

At North Alabama, Krumback was a top hitter for the team, according to The Times Daily. In one April 1986 double header, Krumback picked up five hits in seven at bats, knocking in seven. In another game the next April, Krumback had three hits, including a home run and a double.

His efforts there, though, didn't result in Krumback being drafted. Unsigned, Krumback went to Idaho, playing 1988 with independent Boise in the short-season Northwest League.

In 69 games at Boise, Krumback hit .324, with 51 RBIs. He also earned himself a slot in the Reds system, signed as a free agent.

With the Reds, Krumback played 1989 between single-A Greensboro and single-A Cedar Rapids. In 76 total games between them, Krumback hit .279, knocking in 32.

Krumback returned to Cedar Rapids for 1990, playing a full season there. Krumback's average, though, dropped to .236.

He didn't return to the Reds system for 1991. Instead, he moved to the independent Reno Silver Sox of the high-A California League. There, he hit .291, with 30 RBIs, ending his career.