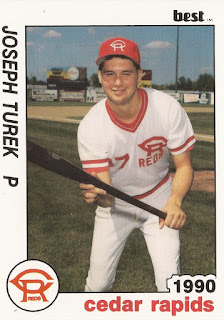 Joe Turek learned he'd been drafted in an unusual way, according to The Philadelphia Inquirer: It was shouted to him across a baseball field at a game.

Once drafted, though, the 10th-round pick told The Inquirer he knew it wasn't going to be easy.

Turek ended up working in the pros for seven seasons. That work got him to AAA, but he never made the majors.

Turek's career began that year in 1987, taken by the Reds out of West Chester University of Pennsylvania. He played his high school ball at West Chester East.

With the Reds, Turek started at rookie Billings and in the rookie Gulf Coast League. He had a 3.62 ERA overall on the year.

He moved to single-A Greensboro for 1988, where he went 10-3 over 19 outings, 17 starts. He also had a 2.75 ERA. Turek pitched into the eighth inning of a May game, giving up one unearned run. He picked up an August win with six innings of work.

Turek impressed enough to be taken by the Athletics in the minor league draft that December. He didn't stick with the club, returning to the Reds for what ended up being his most successful season advancement-wise.

Turek then found himself involved in a major league trade. Turek went to the Indians with major leaguers Jack Armstrong and Scott Scudder for Greg Swindell. Turek was assigned to AA Canton-Akron.