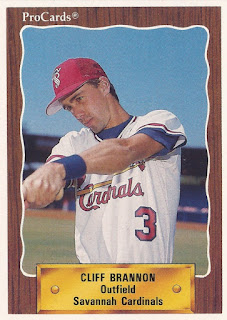 The Savannah Cardinals took this August 1990 game and Jeff Brannon was a big part of that, according to The Savannah News-Press. Brannon did that by hitting two late home runs in the 4-2 win.

"Up until the sixth, we couldn't get anything going," Brannon told The News-Press. "I'm just glad to help out the team. I really haven't been thinking about hitting home runs lately."

It was the second time that year that Brannon hit two home runs in a game, The News-Press wrote, and he went on to take the league home run crown.

Brannon went on to make AA Arkansas the next season, but Brannon would get no higher. His career essentially lasted four seasons. He never made the majors.

Brannon's career began in 1989, taken in the 29th round of the draft out of Kennesaw State University in Georgia.

He moved to single-A Savannah, hitting .247, with those 18 home runs. He hit a three-run home run in a July game. His second home run of the year came in an April game. It proved the game-winner.

"It feels really good to be able to do that," Brannon told The Savannah Morning News. "I mean, how could it not?"

Brannon hit .212 that year for Arkansas, with three home runs. It was his final full-time season as a pro. He returned to the field briefly at AA Shreveport in 1995, ending his career.