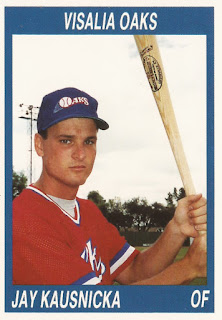 The Orlando SunRays won the 1991 Southern League title, with no small part of the credit going to Jay Kvasnicka.

"This really means everything," Kvasnicka told The Sentinel after the title series win. "We had such a rough start this season . . . to come together and win it all, you just can't imagine how good this feels."

Kvasnicka helped Orlando to that title in his third season as a pro. He would only get one more season and he would never make the majors.

Kvasnicka's career began in 1988, taken by the Twins in the eighth round of the draft, out of the University of Minnesota.

Kvasnicka then moved to AA Orlando for 1991, helping the team to the league title. During the season, he hit .271, stealing 23. In the championship series-winning game, Kvasnicka hit the game-winning single in the bottom of the ninth.

Kvasnicka returned to Orlando for 51 games in 1992. He also got his only look at AAA Portland, 26 games that year. Between the two, though, he hit just .212, ending his career.

To The Brainerd Dispatch in 2009, Michael Kvasnicka credited his father's coaching influence with becoming the player he was. Kvasnicka was in Brainerd playing summer collegiate ball.

"I wouldn't have any idea where I'd be (without him)," Michael Kvasnicka told The Dispatch of his father. "Because of him, I'm starting to figure stuff out on my own and not need him, but he likes talking baseball and I like talking baseball. It's great having him, you know?"