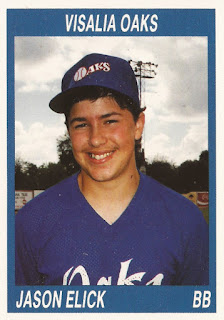 Visalia Oaks bat boy Jason Elick got to do something in 1990 few bat boys have been able to do.

He got to collect himself.

Elick made the Visalia Oaks Cal League set in 1990 with fellow bat boy Robert Spurlock. Each got their own card, along with the players that every kid looks up to.

The back of Elick's card notes Elick's hobby at the time. Elick, the card notes is "a big collector of both Major League and minor league baseball cards."

Elick was in his fourth year as a Visalia Oaks bat boy in 1990, according to his card. He was then a student at Tulare High School in Tulare, Calif., which is just south of Visalia.

Off the professional field, Elick played the game. The bat boy played baseball in the Tulare Babe Ruth League, his card reads.

A definitive account of Elick's time since his stint with the Oaks was not available, however, there is a listing Jason Elick connected to Tulare as a probation officer. 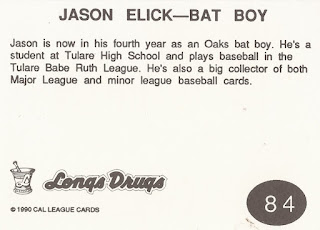