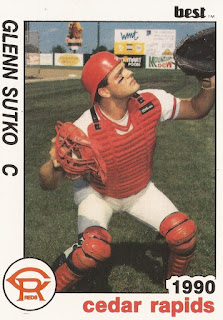 But the Reds had an idea to get him back and it was an idea that Sutko wasn't happy with, he told The Pittsburgh Post-Gazette later. That idea was for the catcher Sutko to become a pitcher.

"I didn't want to pitch," Sutko told The Post-Gazette. "My heart is behind the plate. Until last year, I never owned a glove other than a catcher's mitt."

Sutko ultimately spent a single season on the mound, pitching 1993 at high-A Winston-Salem. He then returned to catching, but he never returned to the majors. He played in eight seasons total and those 11 games marked the extent of his big league career.

Sutko's career began in 1987, taken by the Reds in the 45th round of the draft out of Spartanburg Methodist College in South Carolina.

Sutko also got called up directly to Cincinnati at the end of the year. He played a single game, Oct. 3, and got one at bat. He struck out.

Sutko then returned to Cincinnati for 10 games in 1991, in May, June and July. He got 10 at bats and one hit. The one hit came May 18 against the Padres. It was a run-scoring single in the ninth inning. He played the rest of the year between Chattanooga and AAA Nashville.

Sutko then returned to the minors full time for 1992. He played the year back at Chattanooga. He got into 64 games and hit .187.

Then came his year as a pitcher. At high-A Winston-Salem, Sutko got into 28 games, 14 starts, and had an ERA of 4.30. It was his final year with the Reds.

He played spring 1994 with the Pirates. Going into that spring, Pirates manager Jim Leyland described to The Post-Gazette his new catcher-turned-pitcher-turned-catcher.

"His hitting is only so-so but he's good behind the plate and can throw," Leyland told The Post-Gazette.

For the 1994 season, though, Sutko played in the Brewers system. He split time between AAA New Orleans and single-A Beloit. He hit .221 between them, with six home runs.