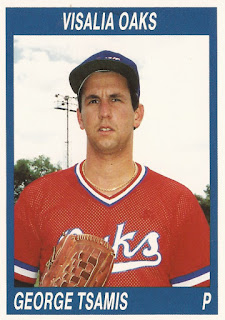 By July 1993, George Tsamis already had more two months in the bigs behind him.

To his hometown Orlando Sentinel, he could only describe that time as a single word.

"It's unbelievable,'' Tsamis told The Sentinel. "The big leagues is just the greatest place. Since you're a little kid you've dreamed of it, and that's exactly what it's like."

For Tsamis, his stay in that greatest place continued through the end of the season, 41 total relief outings. Though he would play professionally for five more seasons, he never did get back.

Tsamis' professional career began in 1989, taken by the Twins in the 15th round of the draft, out of Florida's Stetson University. As a kid, Tsamis played in the Little League World Series.

Tsamis began with the Twins at single-A Visalia, serving as a starter. He returned to Visalia for 1990, then made the jump to AAA Portland for 1991.

The jump to Portland was an emergency call-up, but Tsamis pitched well enough to stay, The Sentinel wrote. That started thoughts of the next jump, to the majors.

'They (the Twins) have great pitchers, a lot of good pitchers, so it's going to be tough to break in there,'' Tsamis told The Sentinel. "I'd like to play for the Twins some day, but I'd prefer whatever gets me up there faster - as long as I get up there. There's nothing I can do about that, though. I can only think about pitching."

With the Twins, Tsamis recorded those 41 relief appearances, his last coming Oct. 1. He picked up a save and a win, along with two losses. His ERA stood at 6.19.

His only win came May 26 at Oakland, where he went 1.1 innings, and gave up an earned run in a steady rain.

"I tell you what, that was a great thing even though I got knocked around a lot," Tsamis told The Minneapolis Star-Tribune years later. "I sat in the room that night and couldn't believe it. I played with some good guys. I'm lucky. That ball is my prized possession."

After Tsamis' major league run, he returned to the minors, playing in affiliated ball through 1995. He then played independent ball for three more seasons, ending his pro career.

For Tsamis, though, it was in independent ball where he found his home. In 1999, he picked up his first managerial job with the independent Waterbury Spirit. In 2003, he moved to independent St. Paul. He has managed there since, continuing into 2015.

Talking to The Hartford Courant after winning his first managerial job in 1999, Tsamis put that selection right up there with his other accomplishments.

"Next to being told I was going to pitch in the major leagues,'' Tsamis told The Courant, "this is the happiest moment of my baseball career.''