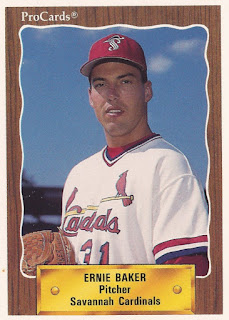 Ernie Baker recounted to The Fredericksburg Free Lance-Star how he'd gotten caught up in a numbers game that spring in 1993.

After playing four seasons in the minors, Baker was without a team. His career was likely over.

"There were 12 pitchers on each (minor-league) level, and there was not enough room for me," Baker told The Free Lance-Star. "I'm fine with that. The first week, I was pretty upset. But I've got a family now, so I have different priorities."

Baker's career was indeed over. But his connection to baseball was far from it. He has since gone on to be a coach in high school. He also offers instruction through his own business, Baker's Baseball in Virginia.

Baker's career began in 1989, signed by the Cardinals as an undrafted free agent out of Southern Illinois University-Edwardsville.

He moved to single-A Savannah for 1990. He had a 6-3 record over 70 relief outings. He also had a 2.03 ERA. He got out of a seventh-inning jam by striking out two and inducing a deep line-out.

Baker's 1991 season was comparatively shorter at 40 games. He got into 38 of those games at high-A St. Petersburg. He spent the other two at AAA Louisville. He gave up one earned in four innings at AAA. Overall, he had a 4.22 ERA on the year.

Baker's final pro time came back at St. Petersburg in 1992. He got into 12 games, ending his career.

Baker then settled into the Fredericksburg area. By 1999, he was a high school baseball coach, taking over at Brooke Point High School in Stafford, Va. He later moved to nearby Colonial Forge High, serving as a physical education teacher.

He also runs Baker's Baseball, his own baseball school in Fredericksburg.

In 2003, while coaching at Colonial Forge, Baker recounted to The Free Lance-Star the most rewarding part of his job: Helping his players move on.