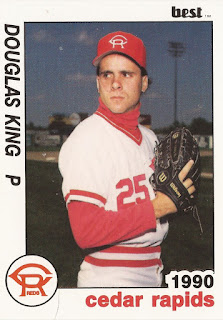 Mike Lane's University of North Alabama could do little in the first game of this February 1989 doubleheader.

That's because Delta State's Doug King was on his game, giving up just four hits, The Florence Times Daily wrote.

"Although we didn't make some plays defensively, the difference in the first game was their pitcher," North Alabama coach Mike Lane told The Times Daily. "He threw the ball well considering the time of year this game was played. He got his breaking ball over and competed real well."

King's career began that year, signed by the Reds as an undrafted free agent out of Delta State.

At Delta State, King was described by The Times Daily as leading the staff. By mid-May, he had a record of 9-2, with a 3.72 ERA. He'd also struck out 74. It was enough for him to be named to the all-conference team.

For 1990, he split time between single-A Charleston and single-A Cedar Rapids. Between the two, he got 43 relief outings, no starts. He posted a 3.94 ERA and had a record of 3-7.