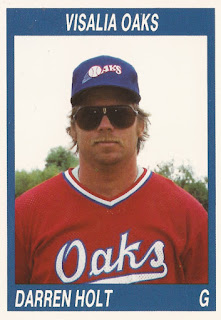 Darren Holt returned to the field in 2007 as a coach. It was the annual College of the Sequoias alumni game and Holt led the alumni team.

Holt was previously a player at the school, playing there in 1978 and 1979 before going on to Fresno State. His father Bert Holt once coached the college team.

Holt had also previously been a player in the pros, albeit briefly in the Yankees organization.

In 1990, he had himself a different role in the game than as a player or as a coach. He was groundskeeper for the Visalia Oaks.

Holt started at Mt. Whitney High School in his hometown of Visalia. He then moved to the College of the Sequoias for two seasons. He then played 1980 at Fresno State.

It was in the June 1980 draft that Holt started his brief stint with the Yankees. The club took him in the 37th round of the draft and assigned him to the rookie Gulf Coast League.