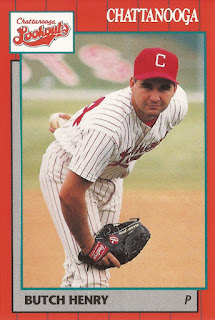 A few games into his major league career, Houston Astro hurler Butch Henry had shown a tendancy to be wild, according to The Associated Press.

In this July 1992 game, though, Henry seemed to figure it out, going seven innings for a 3-1 win against the Mets, The AP wrote.

"Walks tend to hurt me a lot," Henry told The AP. "But today, I had my control and gave up only one. I tried to make them hit it, and luckily, when they did, they hit it right at somebody."

Henry went on to a major league career that saw time in seven seasons. He's since gone on to time as a coach in independent ball and the minors. He's serving as pitching coach for 2015 with the Yankees at short-season Staten Island.

Henry's career began in 1987, taken by the Reds in the 15th round of the draft out of El Paso High School.

Henry started with the Reds at rookie Billings. He went 4-0 in nine outings, with a 4.63 ERA. He moved to single-A Cedar Rapids for 1988, then AA Chattanooga in 1989. He moved to the Astros in a trade for 1991 and played that year at AAA Tucson.

Henry then helped the Expos to the best record of the strike-shortened 1994. He got into 24 outings that year, starting 15. His ERA came down to 2.43.

He continued that success in 1995, starting 21 games, posting a 2.84 ERA. That June, Henry pitched shutout ball into the ninth inning against the eventual world-champion Braves.

"Some nights are better than others," Henry told reporters of his effort against the Braves. "Tonight everything went my way. I used the fastball to get inside and I felt I threw a lot more changeups than I normally would. They were hitting changeups."

His 1995 season ended with injury, a ligament in his throwing elbow pulled away from the bone. Henry tried to keep it quiet until it became too much, according to The AP. Henry underwent surgery and rehabilitation. He didn't play at all in 1996.

He returned to the field in 1997 and got some regular major league playing time. He got 36 outings, five starts for the Red Sox. He had a 3.52 ERA, seven wins and six saves.

Henry returned to the Red Sox to start 1998, but tore his ACL early and got only two starts. He then made it back one more time in 1999 with the Mariners. He got into seven games and picked up two wins.

He got his first win back in 1999 in early April in Seattle. He told The AP he wasn't nervous for his return.

Henry played the rest of 1999 at AAA Tacoma. He didn't play in 2000, but returned for one final season and 18 final minor league starts between three organizations.

He has since gone on to a career as a coach. He started with the Reds as a roving instructor in 2004, then served as pitching coach at rookie Billings in 2005. He then spent five seasons managing his hometown independent El Paso Diablos from 2006 to 2010. He then returned to affiliated ball in 2015 as a pitching coach with the Yankees at short-season Staten Island.

"It'll be great to work with young pitchers and help them develop," Henry told his hometown El Paso Times after being named to his new position in January 2015. "We'll have a lot of New York's draft picks and we'll work on helping them achieve their goals. As a staff, we'll work hard. It'll be a chance to work with different kinds of kids. I've been there and hopefully I can use my experience to help them."
1990 CMC-Pro Cards Tally
Players/Coaches Featured: 2,075
Made the Majors: 909-43.8%-X
Never Made Majors:1,166-56.2%
5+ Seasons in the Majors: 387-X
10+ Seasons in the Minors:223
Posted by Steve78 at 4:04 PM