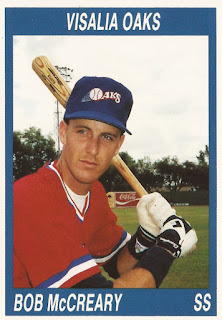 Bob McCreary saw himself playing in the majors, he told The Orlando Sentinel in 1992. By that point, though, his path had changed a bit.

A former infielder, McCreary in 1992 played his first season at a new position, pitcher.

"I know I can do it. I just have to continue to work hard, listen to my coaches and learn what it takes to become a better pitcher," McCreary told The Sentinel that July. "Actually, the toughest adjustment has been getting used to not playing every day."

McCreary was in his fourth year as a pro that season in 1992, his first as a pitcher. He ended up playing just one more season. He never made the majors.

McCreary's career began in 1989, taken by the Twins in the 19th round of the draft, out of Villanova University in Pennsylvania.

McCreary started at rookie Elizabethton, hitting .279 in 62 games. He also knocked in 28, all while playing shorstop.

Then came his conversion to pitcher. To The Philadelphia Inquirer that June, McCreary recalled how Twins minor league director Jim Rantz tested McCreary's arm that previous off-season in instructional league.

"It started out as an experiment," McCreary told The Inquirer. "But once they saw me throw, I knew it wasn't going to be temporary. I've always had good mechanics and a good, smooth motion. I knew I'd never play shortstop again."

McCreary later went on to a long post-playing career as a coach. In 2011, he stepped down after 13 years as head coach at North Penn High, outside Philadelphia. In 2009, he led the team to the state title.

"He's had a great run, including the state championship," North Penn athletic director Don Ryan told PhillyBurbs.com after McCreary stepped down. "He's just an overall good coach. He has baseball knowledge, in coaching and dealing with kids."