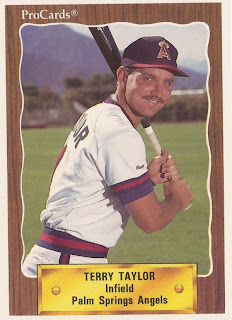 Terry Taylor came out of Texas A&M in 1989 with big hopes. He was a junior and he'd been taken by the Angels in the fifth round of the draft.

"Both the team and I thought I had potential to be a big leaguer," Taylor told an industry Web site years later, "and I played in the minors until 1992."

Taylor played in the minors for a total of four seasons. He never made it higher than AA.

Taylor's pro career began that year with his selection by the Angels in the June draft out of Texas A&M.

At Texas A&M, Taylor earned all-conference honors in each of his three years at the school. He was also named first-team All-American by Baseball America in 1989.

In an April 1989 game, Taylor broke up a double play in a key spot in the ninth inning, leading to a game-winning home run.

With the Angels, Taylor played his first year at short-season Bend. The infielder got into 16 early games and hitting .240. His season was cut short by injury, tearing a a ligament in his knee while turning a double play.