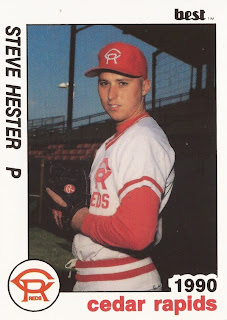 The signing put Convertini in a small club of other Cedarville signees, a club that may have as few as two members.

Though he signed, Convertini was never credited with getting to a pro team. Hester, though, did get to a pro team, playing professionally in four seasons, never making the majors.

Hester's route to his pro career began in his native Virginia, playing ball at Western Albemarle High School in Crozet.

There, Hester is counted among a bigger club of players who played beyond high school. A list of Western Albemarle baseball alums counts six former players, Hester among them, as going beyond college, on to the pros.

Moving to Cedarville, Hester didn't stay long. The Reds selected him in the 13th round of the 1987 draft, after his freshman year at the school.

With the Reds, Hester started at rookie Billings. The right-hander started five games for the Mustangs, going 2-1, with a 5.76 ERA.

For 1989, Hester made single-A Cedar Rapids, going 10-7, with a 3.50 ERA. His career, though, ended in 1990, with Cedar Rapids. Hester is recorded as playing just one game for the single-A Reds that year, going six innings and giving up a single run.