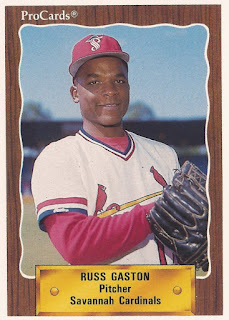 Russ Gaston got himself into trouble often in this April 1990 contest for single-A Savannah, according to The Greensboro News & Record.

Gaston responded by getting out of just about every jam, The News & Record wrote, striking out six and picking up the win.

Gaston was in his second professional season that year. He played in just one more. He seemingly couldn't get himself out of enough jams to make it out of single-A.

Gaston's career began in 1989, signed by the Cardinals as an undrafted free agent out of Southwestern Illinois College.