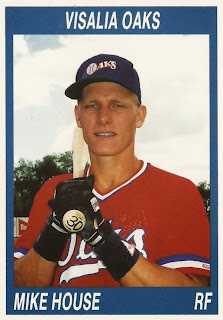 Mike House got himself drafted and played as a pro. Years later, he credited that path with a different path he chose for himself in college.

"After transferring to Hawaii Pacific College in 1987," House told his original school, Lewis-Clark State College, years later, "I was able to turn my career around."

House did do well enough at Hawaii Pacific to get drafted, but he apparently didn't do well enough as a pro for a long career. He's credited with just two seasons, making it to high-A Visalia, but no higher.

A native of British Columbia, House was drafted out of Hawaii Pacific in the 18th round in 1989.

In one March 1988 game at Hawaii Pacific, House knocked a two-run home run, and did it off his old school, Lewis-Clark. Also at the school, House is credited with earning 1989 Male Scholar Athlete of the Year honors in 1989 and NAIA All American honors that same year.

As a pro, House started at rookie Elizabethton. In 63 games there, House hit a stellar .376, winning the league's batting title. He also hit 12 home runs and knocked in 68.

But his year with Visalia was also his last recorded year as a pro, though to Lewis-Clark, House referenced two more seasons that apparently did not include appearances in games.