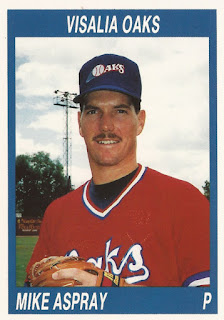 Mike Aspray nearly got himself a perfect game. Instead, he settled for a no-hitter.

Going into the ninth inning, Aspray hadn't allowed a Waterloo Indian to reach base. With one out, though, he walked one, then another.

Still, though, Aspray managed to finish off the game without allowing a hit for single-A Peoria.

Aspray accomplished that feat in his second year as a pro. But Aspray wasn't able to translate that single-game success into a long career. He ended up getting just two more seasons, never making it above high-A.

Aspray's professional career began in 1987, signed by the Cubs after a college career that took him to West Los Angeles College and Cal State Dominquez Hills. He was previously taken by the Royals in the 10th round of the January 1985 draft, but did not sign.

In college, at Dominquez Hills, Aspray helped his team to the Division II College World Series in 1987, earning conference co-pitcher of the year honors along the way.

With the Cubs, Aspray started at short-season Geneva, getting 23 outings, two starts, posting a 2.45 ERA. He also struck out 56.

For 1988, Aspray returned to starting, going 10-14 between single-A Winston Salem and Peoria, getting that no-hitter at Peoria. He also posted a 2.73 ERA, striking out 131.

Aspray played at Winston-Salem full-time in 1989, going 8-15, with a 3.86 ERA. In May, Aspray picked up a win in the front-end of a double-header, giving up just two hits. It was his last year with the Cubs organization.

For 1990, Aspray arrived with the Twins, sent to high-A Visalia. There, Aspray got into just 19 games in relief, posting a 3.46 ERA. By early August, Aspray received his release, ending his career.